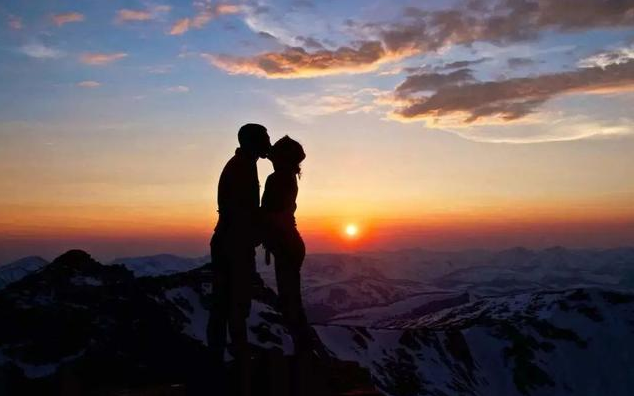 With so many people chasing her, he can "stand out" just because of his short message: "Be with me, never separate!" Proud heart instantly wet, she no longer hesitates. He is not a very good man, but this sentence makes her heart steady, no longer wavering, like seeds falling into fertile soil, with support.

Old in advance and determined to live with him, love faded, from renting a house to having a big house, a son, and a car. Although she suffered, she had no regrets, and she owned it again and again, which was full of love.

When the hard times come to an end, the good days seem to be uneventful, but it is precisely the tranquility she yearns for. Besides, this man who loves her deeply always touches her. On that day, she bought new clothes and asked him if he looked good in front of the mirror. He smiled and said, "Of course it looks good, but I look forward to you getting old, looking forward to you getting old one day earlier!"

She opened her mouth wide in surprise: "Why?" He said, "You are always so young and beautiful. I am afraid you will fly someday. If you are old, your hair is white and your teeth are gone, I won't worry. " She understood what he meant, and he was not a confident man in this respect. In fact, it is because of deep love. So she said: "I am afraid that I am really old, and you will abandon me!" He said that love will not always be as delicate as a flower. Sooner or later, it will grow into two mottled trees with connected roots and branches, just like an 81-year-old man and an 80-year-old woman holding each other and walking in the sunset. How beautiful it would be!

People are so beautiful when they are old. She is full of joy, but she blames them lightly: "I don't want to be old, it's ugly and ugly."

But I didn't expect that people sometimes become a luxury even if they want to grow old.

That spring, when she took a bath, she found her body strange, went to the hospital for examination, and was diagnosed with cancer common to women. This year, she was 32 years old, which is the most charming age for a woman.

He was silly after reading the medical certificate. He asserted that this was definitely a misdiagnosis, so he put everything down and took her to the big hospitals in Beijing and Tianjin for further examination. Every time, it is the same result ...

Have to accept the reality. Since it is true, vulnerability is not his choice. Otherwise, who does she depend on?

Next is surgery and chemotherapy. He learned a lot about this kind of cancer, and he comforted her that although it is called cancer, it has a high cure rate, which can reach 80%, even as high as 90%, and many people have recovered after the operation. She said with a wry smile: "Don't comfort me, I know in my heart, don't worry about me, I can hold on."

After all, it is the disease that falls on me. Every time she received chemotherapy, she felt like she was going to break down. Looking at him, she thought, if he really collapsed, he would feel worse than himself. It's almost an old couple. This man is worried that she will fly. Great, I can't fly if I want to. She laughed at herself secretly.

Thanks to good cooperation, her condition gradually stabilized and did not continue to deteriorate.

This year, he treated her illness as a top priority. Every morning, wake her up like a sleepy child, take her to the park, and practice Tai Ji Chuan with the old men and women. This kind of exercise is the best treatment for this disease. When he comes back from morning exercises, he will cook soybean milk for her personally, watch her drink it, then make tea, and tell her to drink it when it is cold.

To cure this disease, we should adjust our diet and have a good attitude. He has never left her for half a step except for eight hours at work, so he amuses her when he has nothing to do. She also knows that he can't bear to live up to his good intentions. But after a long illness, he also despises life and death, so he often makes plans for the other half in his heart. If he is still young, he can find another one to accompany him to grow old slowly. It is unfair for such a good man to be alone with him.

It was another spring in an instant. He is going to Jiangnan city on business, and he hasn't been out for a long time.

There is a famous international clothing city in the south of the Yangtze River, which brings together famous brand-name clothing from all over the world. He went all over the specialty stores to select clothes of various textures and styles for her. I used to buy it for her when I was on a business trip. She loved dressing up and complained that he was spending money indiscriminately, but her eyes revealed her inner joy. But every time he only bought one or two pieces for her, and this time, he bought more than a dozen pieces.

With so many clothes in front of her eyes, she was dazzled, looking at them one by one, suddenly rejoicing and frowning-because there were a few clothes whose colors and styles were obviously uncomfortable, and they were fat and old. She asked: "Is it for mom?" He said, "Not all of them are for you." She said: "Look at this color. I look old when I wear it, but my mother wears it too tender. What is your vision?" Suddenly, her eyes were attracted by a pink packing box! The logo on it is like a woman dancing, with beautiful curves and delicate smiles. Kang Xinmei? She was confused again and didn't know what her husband bought her.

Seeing her curiosity, he said, "This is specially prepared for you. It is Kang Xinmei's breast milk. You should live a healthy, confident, and beautiful life as Kang Xinmei preached! In my eyes, you are always the most beautiful woman! " As he said, he picked up the fat and old clothes in her opinion and said, "Look, these two clothes are just right for wearing after the age of 40, and these two clothes are not out of date for wearing at the age of 50. There are also these... These are famous brands and wholesale prices. I simply buy them for decades. If I only buy what I want to wear in front of me, it is not economical. You should praise me for my long-term vision!"

Her heart was surprised, he said it naturally, but it seemed unintentional, but her heart turned upside down and suddenly understood-he hoped that she could drive away inferiority and find courage and confidence; He hopes that she can live to be 40 years old and 50 years old … and grow old with him slowly. When I think of the short message that grabbed her heart at once, I can't help but grieve my nose. The expectation that I won't be separated all my life and grow old together, I don't allow her to give up, leaving her no choice.

She wants to be old now, 80 years old. In that case, she is always with this man and never separated. So she picked out the oldest dress and put it on, pretending to be old, saying, I am too old to fly. Two people hug each other and laugh happily until they burst into tears.

white and gold wedding dress It is a symbol of elegance and generosity.