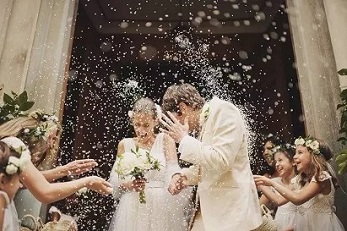 Thank you for all the luck in life, such as meeting you

Both the girl and her fiance went to a university in Nanchong. They met and fell in love during the University. When they graduated, they met the problem most couples faced: separation. The boy's work is in Yushu, Qinghai, where the railway project is built. The construction period is tight, and there are not many holidays at all. The girl works in Yunnan and is a salesman in a large oil enterprise.

Long-distance love is hard. They are thousands of miles apart. When they are busy, they can't even meet twice a year. However, the girl has been sticking to it, and the boy has never failed her. However, this love between the two places always makes the girl feel insecure. She told the planner that after talking to the boy on the phone every night, she had to listen to a program on long-distance love on the radio to fall asleep.

Two years after graduation, the girl quit her job in Kunming and returned to Nanchong. Until now, the girl's decision has not been forgiven by her father. When she was 13 years old, her mother died of breast cancer. Since then, she has been living with her father. She knew she was rebellious, and her father couldn't understand many decisions, including being with a boy. However, she has always had her own independent ideas.

After quitting her job, the girl studied psychology. She felt that her work in the oil company was very depressing, and the environment of the unit made her want to escape. Miss, when it comes to detail, many leaders of the unit are transferred from other places and have married, but after working in Kunming for a period of time, many have had extramarital affairs. She thought of the love between herself and the boy. Fortunately, like her, he in the distance has been guarding this feeling and has never let it deteriorate.

After his work in Yushu, the boy went to Guangzhou and finally followed the project to Wuxi. After five years of long-distance love, they decided to get married. However, only they know how hard the decision is and how much pressure it bears.

Not only did the girl's father mind the boy's origin, but the boy's mother didn't like the girl very much at first. The boy was born in the countryside. His father died when he was a child. His mother raised him and always hoped that his son would be promising. Of course, the boy didn't disappoint his mother. After graduation, he found a decent job and bought a house in Chengdu. Only his girlfriend makes his mother feel a little dissatisfied.

When preparing for the wedding, the girl wanted a wedding dress with the theme of "Ali dream island · my cloud". She told the wedding planner that the story between herself and the boy was like Ali and the cloud.

In "Ali's Dream Island my cloud", Ali meets a cloud falling from the sky. They become good friends, eat and play together. But then the cloud grew and began to cover the sky. The residents of dream island have a problem with the cloud because where there is a cloud is cloudy or rainy. In desperation, Ali drove away from the cloud. Every day after that, Ali would run to a castle on the mountain and look into the distance. He wanted to tell the cloud that he missed it very much.

The girl said that the love between herself and the boy was like Ali and the cloud. They were separated from each other for various reasons, but she wanted to tell the boy that she was waiting like Ali after he left. In these five years, she guarded this feeling alone. Even if she experienced wind and rain, even against her father's will, she should protect it from destruction. This wedding with the theme of "Ali dream island · my cloud" is all she wants to tell in recent years.

According to the planner's description, the wedding was the most touching wedding he had planned.

The day before the wedding, when the families of the couple were rehearsing, the girl's father and the boy's mother cried on the spot. There is a stone road at the wedding site, which uses the stones picked up by the boy and the girl's father and daughter from the Jialing River. By the river, the boy watched the girl's father bend down to pick up stones. Suddenly, he found that he was going to marry the most precious person the man had guarded for more than 20 years. The girl finally knew why her father always thought she was too young to marry so early. In fact, she didn't give up.

The wedding scene was very touching. The couple began to cry from the moment they stepped into the auditorium. Originally, the girl prepared a paragraph to say to her father, but because she was excited, she could only be read by the host. The entrepreneur showed me that:

"Those I have been curious about and have some nervous future. Sometimes, I vaguely feel that they are bright in my heart. It is likely that the voice inside says to continue on the road. I hope you will become stronger. Thank you for your love! Dad, I have spent more than 20 years stubbornly loving you in my own way. In the future, I will love you in your way, and then grow old with you. "

The entrepreneur said that she felt the difficulty of the girl from this paragraph. The reason why she used the word "nervous" to describe her future is that she is not sure whether the love between the two will blossom and bear fruit, but it seems that it is doomed that her love will have a perfect ending. This kind of waiting and nervousness is the beauty of love that others can't understand.

Later, the entrepreneur said that the girl told him that the boy had left Wuxi naked and returned to Sichuan, ending the separation of the two places over the years. Perhaps it was the wedding that made the boy understand that the weight of family and career in his heart, the former is much heavier than the latter.