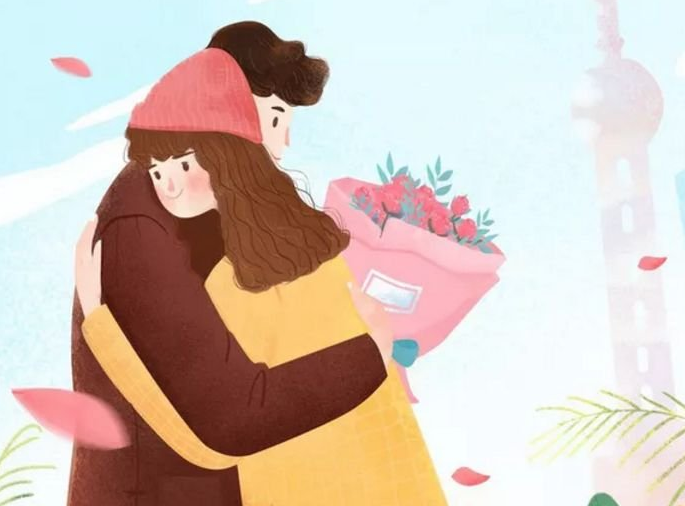 Tiffany is a beautiful and intelligent girl, but unfortunately, she can't go to college because her family is poor. Tiffany's sweetheart Kenneth not only went to college but also went abroad to study. Tiffany works in a restaurant and is very busy every day. Although Tiffany missed Kenneth very much, she didn't call Kenneth. She knew that as long as she called, she would miss Kenneth more, and certainly make Kenneth miss her more, which would affect his study. Tiffany always tells her thoughts in Kenneth's direction in her spare time.

Tiffany's rose suddenly, Valentine's Day arrived. Tiffany thought Kenneth would call her, but she received several calls, but none of them were from Kenneth. Tiffany didn't receive Kenneth's rose. Unexpectedly, Tiffany still received a bunch of roses. Everyone asked Tiffany who gave it to her, and Tiffany smiled and said it was from the bulger.

No one knows who bulger is. As we all know, Tiffany accepted the bulger's rose, which means she loves him. You know, in Carter State, you can't accept roses on Valentine's Day casually, and accepting them means accepting each other. Tiffany is so beautiful that many people like her. Soon, Greg went straight to Tiffany with a bunch of roses. Tiffany picked up the roses that the bulger gave her and said, "I'm sorry! I have already received roses! " Greg insisted on giving the roses to Tiffany, but Tiffany refused to accept them.

Shortly after Greg left, Taylor came to Tiffany with a bunch of roses, and Tiffany took out the roses that bulger gave her and said, "I'm sorry! I have already received roses! " Taylor's insistence never outweighed Tiffany's determination. All morning, no less than ten people came to send roses to Tiffany, but she refused. Everyone saw all this and said Tiffany was really happy: so many people liked her! At the same time, everyone said that bulger was lucky: Tiffany only accepted his roses! Tiffany only likes him.

In the days that followed, people often talked about bulger behind his back because they had never seen him. Supposedly, two of a kind and bulger should pick up Tiffany every day. But bulger didn't send roses in person on Valentine's Day. Isn't he here? Someone asked Tiffany about bulger quietly. Tiffany said with a smile that he was in the local area, but he was too busy to pick her up. So. Everyone hopes that Tiffany can come to the restaurant by Gembal Jay sometimes so that everyone can meet her. Tiffany says he's not available.

A year later, Kenneth came back. That day, he came to Tiffany, and someone told him that Tiffany no longer loved him and had another sweetheart named bulger. Kenneth's heart ached and his tears flowed. He left quietly without seeing Tiffany. In those days, Kenneth was in a trance. He often went to the restaurant to secretly see Tiffany, but when he thought of her empathy, he left painfully. He thought it would be Valentine's Day soon, and bulger would definitely send roses to Tiffany so that he could meet him then. Kenneth decided to teach the bulger a good lesson, so he prepared a wooden stick early.

Soon, Valentine's Day came again. On this day, Kenneth kept staring at the restaurant door. As a result, the bulger didn't show up. It was a girl who sent roses for him. Kenneth was very disappointed. For several days later, he followed Tiffany but still didn't see a bulger. But he has to go abroad again, so he has to put the matter aside. When he left, he wanted to meet Tiffany very much and had a good talk with her, but when he thought of Tiffany's ruthlessness, he gave up. On the night before going abroad, Tiffany called, but Kenneth didn't answer. He hated the ruthless Tiffany.

Kenneth came back again, another year later. Back home, Kenneth couldn't help thinking of Tiffany. He quietly came to the restaurant, looked at Tiffany from a distance, and left sadly. Time flies. Tomorrow is Valentine's Day again. Kenneth decided to send Tiffany a bunch of roses because he had never sent her roses. Since he still loves her, he should send her a bunch of roses, even though she already has another sweetheart. So Kenneth went into a flower shop to order a bunch of roses. Unexpectedly, as soon as he walked into the flower shop, he met Tiffany, and he said, What is she doing here?

Kenneth quietly hid aside. It turned out that Tiffany also came to book roses, but her name was bulger. Kenneth was shocked: Tiffany ordered roses for herself. Why? Doesn't she have a sweetheart bulger? Is this bulger herself? Kenneth showed up in time and blocked Tiffany's way. The sudden appearance of Kenneth surprised Tiffany and said, "Dear Kenneth, you can come back!" Tiffany's eyes lit up. Kenneth said, "Who is bulger? Tell me quickly, I really want to know. " Kenneth kept a close eye on Tiffany.

Tiffany knew that Kenneth had heard the words just now, so she told Kenneth everything: it turned out that bulger was a fictional character. Tiffany knew that there must be many people who sent her roses without Kenneth, but Kenneth was the only one in her heart, and she wouldn't accept other people's roses. To prevent others from getting wild, she ordered a bunch of roses and asked the florist to give them to her in the name of a bulger. For him, Tiffany declined other people's roses, and Kenneth went into the flower shop and resolutely ordered 999 roses ...

Mormon bridesmaid dresses there's nothing wrong with choosing this place.